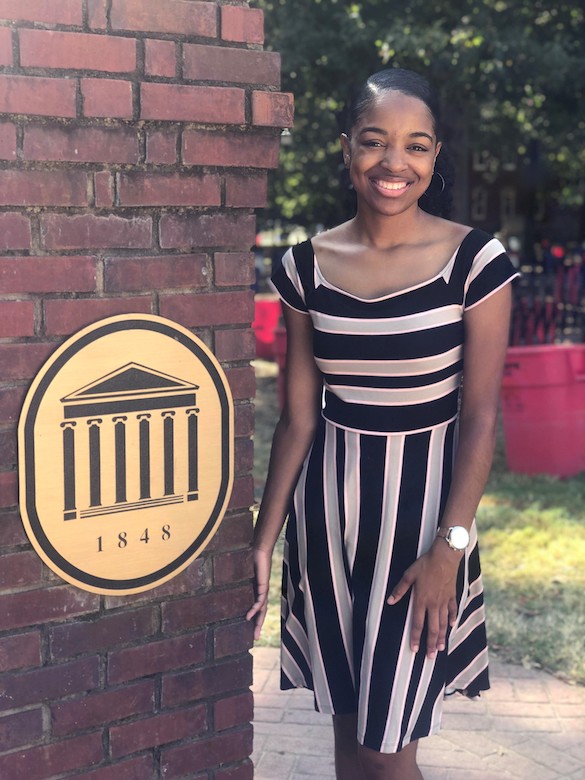 Growing up in the small town of Pickens, Miss., Sophomore Jon’na Bailey has always longed to outgrow her tiny setting. With only a handful of medical professionals in the area and most of them being Family Nurse Practitioners. Bailey decided to put her all into becoming a pediatrician.

Jon’na Bailey’s determination drove her throughout high school and continued on into college.

Bailey has been coming to the University of Mississippi campus ever since 2012 when her brother attended the university. In addition to following in her brother’s footsteps, the welcoming environment and smiling faces helped solidify Bailey’s decision to attend Ole Miss.

“It’s just always felt like home. Everybody was so welcoming. When we came for my brother’s orientation, people were constantly helping us and showing us where to go. And I never got that feeling when I went to any other campus in Mississippi,” Bailey said.

She jumped right into campus life, getting involved in organizations all across campus.

In addition to being a Grove Scholar, Bailey has served as a member of IMAGE and the American Medical Women’s Association (AMWA). She is currently a community assistant, logistics manager for the ASB Outreach Board, FASTrack peer leader and an UM Connect mentor.

Through Grove Scholars’ internship program, Bailey was given the opportunity to shadow Dr. Morgan McLeod this summer. She worked alongside Dr. McLeod at Wallace R. Conerly Critical Care Hospital and Winfred L. Wiser Hospital for Women and Infants, as well as, other smaller clinics in the surrounding area.

The experience gave Bailey a taste of the medical life she had dreamed about. She saw everything from vaccinations to amputee patients, and she observed diligently alongside medical students and interns.

“I thought I wouldn’t enjoy the hospital as much as I did, because hospitals are a bit faster paced. But I honestly enjoyed [the hospital] more. It was consistent every day, and you’re going to have more than one patient every day.”

Bailey credits being a Grove Scholar with helping her get the opportunity to shadow Dr. McLeod.

“Being a Grove Scholar is like being a part of this smaller Ole Miss family,” Bailey said. “It’s filled with people who have experienced or are experiencing the same thing as me. It has provided me with friendships, opportunities and connections.”

Bailey remains enthusiastic on her journey towards medical school as she works to complete her undergraduate degree in Biology.